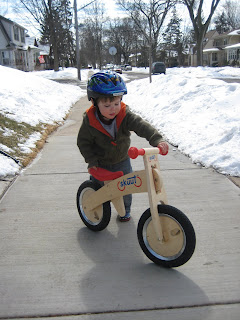 I'm writing this early in anticipation of being overwhelmed by your sister's upcoming birthday extravaganza which falls a day before you turn, exactly 27 months. And having skipped last month, there's a lot to report. You've really become a full-fledged little boy now. At once loving, sweet, open and caring, and at another moment wild, violent, loud and rude. 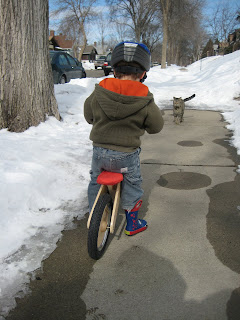 According to the What to Expect: The Toddler Years book, you're doing just fine: using 50+ words, combining words, following a two-step command, etc. etc.

The answer: only if I tie you down in a straight jacket and endure screams and tears.

But seriously, what's with these questions from parents in that book? What were they expecting? A trained monkey? Here's one: "As if the accidental spills weren't bad enough, lately my son has decided it's great fun to spill his drinks intentionally--on the floor, the table, himself. I don't know whether to laugh or cry."

Dude. The other day after you had taken a bowl full of black beans and tipped it over your head, played air hockey (fairly unsuccessfully) with carrot sticks on the table, and used Jello as if it were finger paint on the walls (all in those nano-seconds it takes for me to go to the bathroom, pick up after the previous fiasco, or just wipe your nose) you reached across the table, a finger stretching toward my (glass) glass of ice water and, with a shit-eating grin on your face, tapped it ever-so-slightly so that it would, fall over the edge in slow motion while my "NOOOOOOOOOO!" echoed throughout the house.

I didn't know you had slow-motion powers! 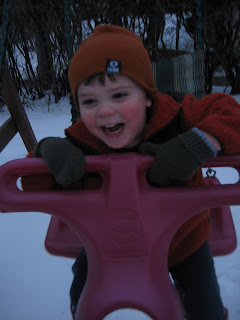 We got you this little bike without pedals (the "Skuut" which you pronounce "sooc!"). When it arrived, you could tell immediately, by the pictures on the box what it was and began searching the house for "scissors" so that you could get to the business of opening the box. BioMom was home for lunch that day and we sat down to our salads only to hear you pushing and grunting the box into the kitchen: "Here you go, Baba! Baba! Here you go! I get scissors. Here you go!!!" I waited for your nap to put it together and when you woke up, I felt like I was watching some Disney production proclaiming love at first sight. At night now, your routine isn't complete without giving "Sooc!" a hug and a kiss. 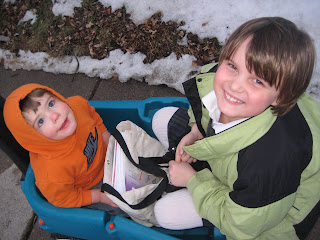 In the above picture, this was the response to my prompting "look up!" Taking me absolutely literally, you looked up. Not at me.

You've started playing make believe, to BioMom and I's surprise. I remember when Seven started playing make-believe with dolls and, really, anything within reach (sometimes salt and pepper shakers or forks and knives while at restaurants). She was around three (we think) and so when you started having your trucks and cars take naps, it seemed a bit unusual. You now often report that one train hit another, or that one car gave another a hug ("hugs!") or some other anthropomorphism. Often cars are found at the dinner table participating in our nightly eating ritual.

Recently, while reading books, you pretend to do things with some of the pictures you see. For example, just tonight when we got to the end of Go dog! Go!, when all the dogs climb the tree to a dog party, you pretended to pick up the cake and eat it, once in a while pinching a piece for me. Then we moved into this more extravagant game of picking up the presents, unwrapping them and declaring what was inside. At one point you pretended to open up a ball, and then proceeded to throw the imaginary ball, expecting me to retrieve it all over the room. Well, I got tired of pretending to get up and get it after you had thrown it from one corner to the other of the room, so I then pretended to intercept your throws! Your last throw got by me and headed toward the television in our room, ultimately smashing the screen. You weren't too upset. 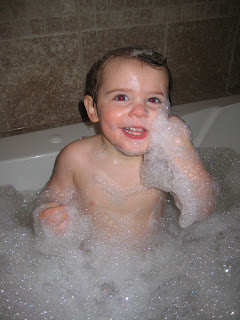 You, however, don't eat much. Still. What is surprising is how you maintain your, (ahem) figure. Recently at gym class, someone went to pick you up and was astonished at how "sturdy" you were! If I give you a decent breakfast, you might not eat another bite the entire day. And you still hate meat. I think in your life, you've eaten about five bites of meat. And that includes the broth in our alphabet noodle chicken soup.

I'm increasing my vegetarian repertoire in your honor. 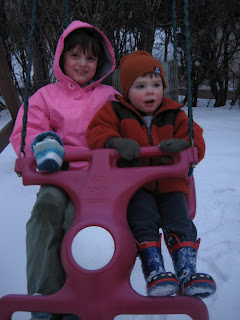 Here's another subheading from the What To Expect book: "What is important for your toddler to know: What's a Mommy? A Daddy? Sorting through gender roles."

To be fair, despite the unambiguous title of the section, the authors acknowledge all types of families including having two moms or two dads. . . "Yet, although many of the sterotypes that were popular in the sitcoms of the fifties and the sixties have been shattered, teh remnants linger in many homes. While Mom may work as many hours as Dad outside of the home, she may still do the Mrs. Cleaver's-share of the housework."

The other day Seven was off of school and we had had a playdate with a couple of girls in her class whose parents are divorced. On the way home she asked why she couldn't stay longer and we said that they were going over to their Dad's house. A few minutes later we heard big say "Baba is Dad." It wasn't entirely clear as his enunciation isn't exactly stellar yet, but BioMom was fairly sure that's what he said. I responded, "yeah! I guess that's right!" Your pronouncement, Big, was really evolved I think. Not only are you starting to get gender roles, but you're able to distinguish between the roles we play as his parents and the roles we play around the house. I'm mostly at home with you (BioMom's mostly at work) yet I'm more of the "dad" and she's more the "mom". 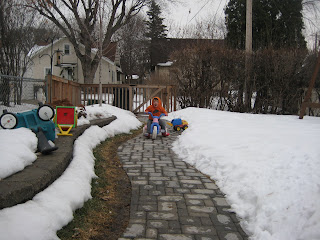 I love you so much, sweetie. 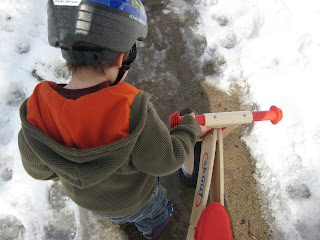 I always love your photographs (especially: Look up! and he did!), likewise your insights. Even if I can only make time to peep from time to time. (Am still more overwhelmed than adequately whelmed; can't even imagine underwhelmed.)

This account of Big just gets me verklemt (sp), since my leetle one is basically trotting about a year behind yours. Whenever I diaper him I think about what you said about diapering Big (happens at a trot).

Happy birthday to all of you.

Hi Polly - and happy birthday to you as well (or, LD, specifically!).

A friend of mine is continually amazed that I can actually change a #2 while Big is standing!!!

Oh, and we've had a lot (repeat a lot!) of peeing on the floor over the past two years. Thank g*&#d that we have mostly wood floors!