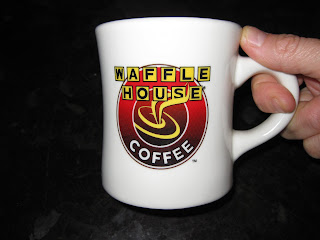 So, my faux mother-in-law (there's no legal relationship going on around here) is hilarious.*

A couple of years ago we visited them during their month-long sojourn to the warm-land in January.

Having done my graduate studies on the east coast, I talked everyone into reliving some of my glory days by heading over to the Waffle House for breakfast.

Let's just say that the food was certainly not what I remembered or had my tastes simply grown with the slight increase in wealth (let's just say that I earn more than my graduate stipend which was then $8,500)?

But the service? That's where this story takes off.

We were being served by a waiter that BioMom and I immediately recognized as one of ours but whom the faux Father-in-law referred to as "Sir" as in "Sir, can I get a refill on this orange juice?"

She didn't flinch. But Eight (then Six or Seven) looked over at grandpa sharply as in "can't you tell that that's a woman? A woman like my Baba?? Are you an idiot?"

We so enjoyed ourselves that BioMom unknowingly left the restaurant with a souvenir mug in her quite accompanying purse.**

So today BioMom spent some time with her parents upon their return from the '09 visit to the land-of-warm only to return with a legitimate, paid-for substitute that I, and I told her so in my appreciative acknowledgment, value less.


*No, this is not a brown-nosing entry. She doesn't know this blog exists, although I do expect she'd pass an exam question such as the following: "What is a URL?" That is to say that it is not that she is computer-illiterate that she is unawares of the goings-on in this corner of the blogsphere.

**This blog author does not support or condone illegal behavior in any way. Do not try this at home.
Posted by giddings at 8:11 PM 4 comments:

So I recently joined LesbianDad's new support group for Widowers of partners lost to Rachel Maddow.

As I said in her comment section, on one recent Valentine's day, I found, upon retiring that evening, a little red card sitting underneath the remote control. Decorated with loving, flowery writing, it mentioned how our nights would, henceforth, be filled with humor and lightness.

Why? I queried my love.

Turn it on! She responded, barely able to hold back her delight.

I flicked on the television only to find a wolf in hot dyke's clothing (albeit unfortunately coiffed for prime-time).

I felt like a 1950's wife receiving a pink bowling ball for Valentine's day.
Posted by giddings at 12:25 PM 2 comments:

Talk about gender-reversals... I've become way too crafty in my stay-at-homo role. See the below progression. 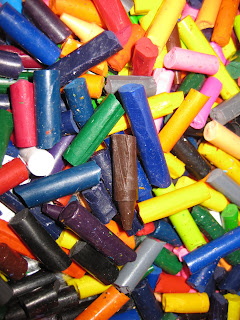 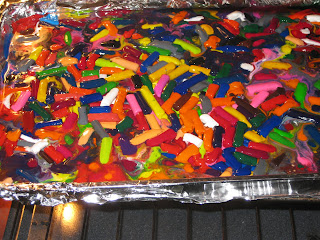 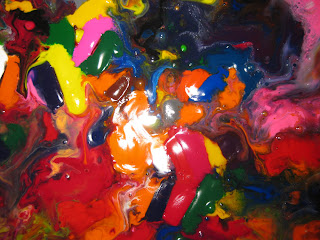 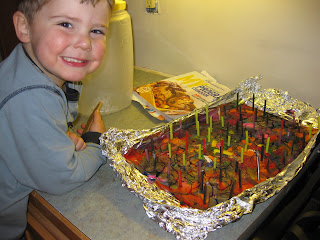 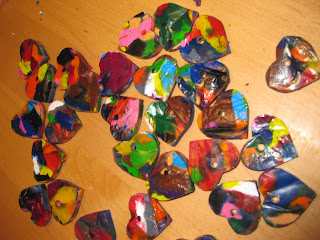 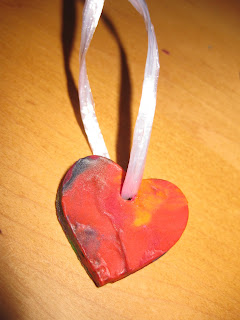 So in addition to all of the discussion of the insane woman who just had octuplets, a friend of ours just delivered her fifth.

No I recognize that I am neurotic and that my reaction here is not very rational, but I can't help but seeing that decision and reacting personally to it.

In my gut I think Who would ever want FIVE children?

My next immediate reaction is: Why don't I want FIVE children?

What does this mean about me and my love for kids if I don't want more?

This is that lesson -- why do people want different things? -- that I've been coming back to ever since that first time I got dumped in high school.

But really. . . Doesn't Christmas (or any holiday) sound great with five excited kids running around, thrilled with the joy of the season? Don't you miss the stages as they go by--first smile, first giggle, first step, first word, first. . . . ? This friend of mine has one before and, now, two after Big so she'll be enjoying a three-year-old at Christmas for some time.

Does sibling rivalry have diminishing marginal returns as one has more kids? In other words, do kids realize that with more of them they get less of an effect either with the parents or with the other kids and therefore fight less?

Do they fight more?

Is it easier if you just give in to it all and not expect to have your own life?

My bottom line is gloves and all other winter paraphernalia.

How the hell can one or two people keep track of five children's winter paraphernalia?

Maybe children's independence increases as the number of siblings increases.

Maybe if we just moved to Hawaii I'd want eight.
Posted by giddings at 1:39 PM 1 comment:


With all the awards being thrown about in the month of January, West Point’s 2nd Annual Cadet Choice Award could easily have gone unnoticed, except for several of their nominations. The Award was set up last year to “celebrate the character’s display of leadership and the West Point values of Duty, Honor and Country.” Last year Will Smith won for his performance as the last man on earth in I Am Legend. But this year, the list seems both obvious and odd. Among the standard men of action are Bruce Wayne (Christian Bale) in The Dark Knight, Colonel Claus von Stauffenberg (Tom Cruise) in Valkyrie, and Dr. Henry Walton “Indiana” Jones, Jr. (Harrison Ford) in Indiana Jones and the Kingdom of the Crystal Skull. But the other two picks seem strange for different reasons. John Hancock (Will Smith) in Hancock is a superhero, but a messy alcoholic one at that. And Harvey Milk (Sean Penn) in Milk was certainly an American leader and a cultural hero, but he was also an openly gay leader pushing others to come out. As such the choice of Harvey Milk seems to collide head on with the Army’s “Don’t Ask, Don’t Tell” policy, and certainly runs counter to the opinion of such military leaders as Marine Gen. Peter Pace, former chairman of the Joint Staffs, who proclaimed that, “I believe that homosexual acts between individuals are immoral, and that we should not condone immoral acts.” But the Cadets obviously feel differently, and that is change we can all believe in.
Posted by giddings at 7:41 PM No comments: 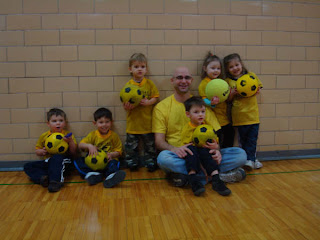 Posted by giddings at 7:27 AM No comments:

The Experiment with Letting Go of Control

So, a couple of weeks ago we had a serendipitous experience with a neighbor who came over to offer us some redecorating advice and conversation.

At some point, the conversation devolved into on of our favorite (or if not favorite, then frequent) topics: Eight's obsession with food.

I could go on and on here with stories and examples, but the truth is, that I've built up so much shame around the topic that it is even difficult for me to write about it now.

But what was so amazing about that night and our neighbor being over was that BioMom and I were in just the right space to hear her message which was this:

What the hell is your problem?

Meaning OUR problem. Meaning how did WE create this OCD behavior in HER.

It still blows me away.

She basically was addressing our concern that Eight doesn't know when to stop eating the stuff that's bad for you. Like drinking enough cups of cocoa to make oneself sick. Like never stopping eating spaghetti. Like obsessing about the single known quantity of dessert in the house for days on end.

Our neighbor pointed out that turning of that 'want spigot' is a skill. And a skill that Eight clearly doesn't have.

We realized that we were controlling way too much in her life: school uniforms, homework, time, her room, etc. etc. And that we should consider letting go of some stuff, prioritizing others. And that maybe her stuff around food was the only thing that she really could control, regardless of what we did.

Then she suggested this:

Why not try saying "yes" to her around food for a while?

Long enough to break the old habits and make new ones. . . Say, six or seven weeks?

What follows will be a series of posts about the initial days and weeks of our experiment: her choices, our reactions.

And, being the over-thinkers that we are, we are, naturally basing all of this in theory. Check out the book How to Get Your Kids to Eat, but Not Too Much.

A teaser for day one: Three soda pops one sitting????

Lee Badgett has a great, carefully constructed, analysis of the income tax consequences of gay marriage that I highly recommend.

I say carefully constructed because she essentially looks at changes in government revenue from tax receipts based on several assumptions about how large the GLBT population is and what would happen if we legalized gay marriage.

As I am doing my taxes now, the first real year in which I worked part time (at least financially -- I worked full time at two different colleges/universities, but at only one was I paid a normal salary) I am considering the implications of not being married to BioMom.

The great irony, is that I might actually qualify for the earned income tax credit (EITC) depending on if they take pre or post-403b contributed income.

I want to compare the extra earnings that I would get from this negative tax to what we were to get if BioMom and I could file jointly -- a practice that mainly benefits couples with a great disparity in their earnings.*


*Note -- I love to unravel the government's goals behind policies. This one clearly encourages the single-breadwinner model in which one person works full-time while the other stays at home. The current income tax model has quite negative consequences for couples who earn similar amounts and file jointly.
Posted by giddings at 7:30 AM 2 comments: 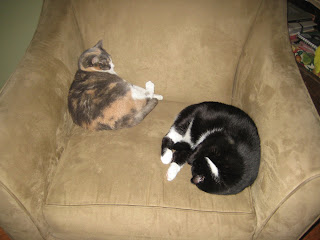 Posted by giddings at 7:21 PM No comments: