A recent article on parenting in the Atlantic Monthly by Lori Gottleib, a psychologist, speaks of adults coming into her office who "suffered from depression and anxiety, had difficulty choosing or committing to a satisfying career path, struggled with relationships, and just generally felt a sense of emptiness or lack of purpose."

Historically, the author claims that the therapists were trained to look at the way the kids were parented. "Our main job as psychotherapists, in fact, was to 're-parent' our patients, to provide a 'corrective emotional experience' in which they would unconsciously transfer their early feelings of injury onto us, so we could offer a different response, a more attuned and empathic one than they got in childhood."

But with these new disgruntled patients she couldn't find the "distracted father" or the "critical mother" or the "abandoning, devaluing, or chaotic caregivers" in their lives.

The problem? Maybe parents are doing too much for their kids.

Gottleib follows parenting advice over the years and finds a single underlying goal of good parenting that has held steady: to raise kids who will grow into productive, happy adults.

The story reminds me of a couple of Woody Allen quotes. The first occurs in Annie Hall, where the character Alvy Singer says "I feel that life is divided into the horrible and the miserable. That's the two categories. The horrible are like, I don't know, terminal cases, you know, and blind people, crippled. I don't know how they get through life. It's amazing to me. And the miserable is everyone else. So you should be thankful that you're miserable, because that's very lucky, to be miserable."

Happiness is a strange thing.

Surveys show that Americans were happiest in 1958.

There's been a spate of articles in the field of economics about happiness lately. Are women happy? Are we happier than our parents? Does money make us happy? Are gays happy?

Behavioral economics speaks a bit to happiness as well. And the research makes the whole question even more confusing because as it turns out our memories fail us. We remember things differently than we experience them, and that alters our perception of how happy we are/were. Remember that family vacation where you drove across the country in a hot station wagon sans dvd player and you and your brother fought the whole way?

We also know that happiness is relative. It doesn't really matter how you feel, but how you feel relative to your peers. We know from experiments that people would prefer to be the top earner in a firm at $55,000/year than to be the bottom earner at $65,000 per year.

"Nowadays, it's not enough to be happy-if you can be even happier. The American Dream and the pursuit of happiness have morphed from a quest for general contentment to the idea that you must be happy at all times and in every way. 'I am happy,' writes Gretchen Rubin in The Happiness Project, a book that topped the New York Times best-seller list and that has spawned something of a national movement in happiness-seeking, 'but I'm not as happy as I should be.' "

Now, back to parenting and this quest for happy kids. Psychiatrist Paul Bohn of UCLA argues that in our quest for happy kids, "many parents will do anything to avoid having their kids experience even mild discomfort, anxiety, or disappointment--'anything less than pleasant,' as he puts it--with the result that when, as adults, they experience the normal frustrations of life, they think something must be terribly wrong."

Dan Kindlon argues that "'It's like the way our body's immune system develops,' he explained. 'You have to be exposed to pathogens, or your body won't know how to respond to an attack. Kids also need exposure to discomfort, failure, and struggle. I know parents who call up the school to complain if their kid doesn’t get to be in the school play or make the cut for the baseball team. I know of one kid who said that he didn't like another kid in the carpool, so instead of having their child learn to tolerate the other kid, they offered to drive him to school themselves. By the time they’re teenagers, they have no experience with hardship. Civilization is about adapting to less-than-perfect situations, yet parents often have this instantaneous reaction to unpleasantness, which is 'I can fix this.''"

It's painful to watch your kids in pain. If you're like me it's almost visceral. I can feel it in my stomach when I see Big fall or Eleven experience some heartache from a schoolgirl spat.

Are we doing all of this to meet their needs or our own needs?

Sure, there's the ego involved in seeing our kids succeed. But the article also argues that we have less community nowadays and are more isolated as adults. More of us are divorced and we genuinely like spending time with our kids. That and we're working longer hours and having fewer kids which translates into less time with our kids and a heightened degree of "preciousness" in time and quantity. We want to extend that however we can.

We are so worried about damaging our kids' self-esteem and protecting this notion of happiness that we aren't doing what's best for them. We don't say "No", we don't require chores, we allow kids to quit when the going gets tough, we praise adequate performance or even minimal requirements all in the name of self-esteem and what ends up happening is that kids don't know where they stand. What are they REALLY good at?

The article quotes a teacher who refused to be named "A kid will say, 'Can we get ice cream on the way home?' And the parent will say, 'No, it's not our day. Ice-cream day is Friday.' Then the child will push and negotiate, and the parent, who probably thinks negotiating is 'honoring her child's opinion,' will say, 'Fine, we'll get ice cream today, but don't ask me tomorrow, because the answer is no!'" The teacher laughed. "Every year, parents come to me and say, 'Why won't my child listen to me? Why won’t she take no for an answer?' And I say, 'Your child won’t take no for an answer, because the answer is never no!'"

Barry Schwartz, at Swarthmore, believes that well-meaning parents give their kids so much choice on a daily basis that the children become not just entitled, but paralyzed. "The ideology of our time is that choice is good and more choice is better," he said. "But we've found that's not true."

I couldn't agree more. Recently I found myself and BioMom "negotiating" over which picture package we were going to order for Eleven's dance class. Naturally she wanted the largest, most expensive package including a gazillion wallets (for all of her friends), twelve 8x10s (for all extended family members), a sculpture (because Big got one for hockey) and a poster (for her room). Adding up the dollars in my head it dawned on me that I would never have been allowed to partake in such a decision as a child. It was, literally, none of my business! I tried saying that to Eleven and she was astonished that I would consider such a purchase to be none of her business.

Since then I've watched other decisions in which my kids feel they have a right to partake including meals, restaurants, television, decor and even major purchases. These are all things that I didn't have to, and wasn't allowed to worry about as a kid.

I think the irony in this is that we treat kids in some sense as adults when they are young, but also as complete nincompoops. We let Eleven help us decide whether or not to buy a cabin in Northern Wisconsin, but we've never let her walk to the candy store four blocks away!!??!! Or we don't trust that she can find her way to and from the park?

According to the article: "We didn't expect so much choice [when we were kids], so it didn't bother us not to have it until we were older, when we were ready to handle the responsibility it requires. But today, Twenge says, "we treat our kids like adults when they’re children, and we infantilize them when they’re 18 years old."

All of these choices lead them to feel like they are entitled, which is negative in itself, but this, coupled with a desire to have them not experience discomfort allows them to choose away from the hard stuff (like practicing piano or guitar, do math homework or clean their room). And yes, I'm gonna get to Amy Chua, Tiger Mom and my hero.

So back to happiness. And economics.

The standard Neoclassical model of economics argues that we're just hedonists. We don't want to work (it is a cost to us) but we want to consume. We work to consume. And that's what increases our "utility" or happiness.

I think the model couldn't be more wrong. Marx had it right when he argued that we can get happiness from work and accomplishment.

And Nobel prize winner Amartya Sen had it right with his capabilities approach. It is not only not enough, but it is simply not good to give our kids all of these choices and things, but not give them the tools to deal with the responsibilities. To let them fail and feel pain and hurt and learn that they can get over that.

We've done all of these bad things. I'm not being preachy. But this article spoke to me. Our daughter wants to participate in the decision about which picture package to buy, but she doesn't want to experience the sore muscles, exhausted brain, callouses you get from a hard day's work or practice that would go into earning that money.

We trust our kids with decisions about which grade school to attend (a neighbor of ours wanted her daughter to attend the Spanish immersion program until the daughter thought that it would be too difficult to only learn in Spanish, choosing instead the neighborhood school) but don't make them help out around the house by taking out the garbage, or sticking with guitar lessons and the regular difficulty of practice.

"According to Jean Twenge, research shows that much better predictors of life fulfillment and success are perseverance, resiliency, and reality-testing—qualities that people need so they can navigate the day-to-day."

So.... Happiness. Maybe we need to rethink the whole thing and not set up our kids to think that happiness is about getting ipods and ice cream and avoiding sweat.

Here's another one from Alvy Singer: [addressing the camera] "There's an old joke - um... two elderly women are at a Catskill mountain resort, and one of 'em says, "Boy, the food at this place is really terrible." The other one says, "Yeah, I know; and such small portions." Well, that's essentially how I feel about life - full of loneliness, and misery, and suffering, and unhappiness, and it's all over much too quickly."

Maybe parenting shouldn't be about making happy kids. It's like the fish analogy: give the kids stuff that makes them happy now, or the tools to be competent adults and let them figure out what makes them happy.
Posted by giddings at 1:10 PM No comments:

In the mean time check out this awesome video on reactions to gay parents and a rude waitress at a cafe in the south.... This makes me feel optimistic for the upcoming vote in Minnesota.

We Won't Wait for Spring 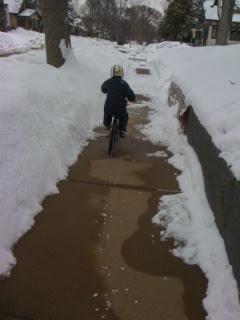 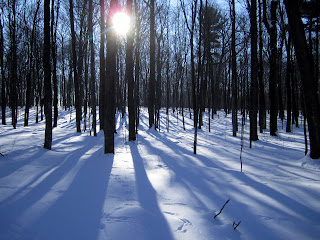 We spent the week between Christmas and New Year's in Wisconsin. It was amazing. Snow and cuddling, and reading, and lego-ing, and dominoing, and Clue-ing, and hiking, and making bagels and making ice cream and loving.

Below are the kids and a couple of friends crossing the foot-thick iced over lake to the island. 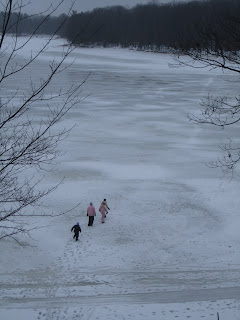 Posted by giddings at 5:05 PM No comments: