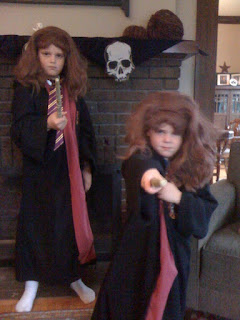 Posted by giddings at 7:44 AM No comments:

So upon Cousin's suggestion, I went ahead and purchased some gifts from Santa last Friday because I happened to be out-and-about and because they were available.

A few years ago Santa brought Ten (she literally may have been five or six at the time) a Hogwarts Lego set. We had a blast putting it together between Christmas and New Years.

This year, Lego is releasing more Harry Potter sets to coincide with the first half of the seventh movie and BioMom and I thought it'd be a perfect Santa present for the kids.

Ten is in the middle of writing her version of the eighth book in which the children of Harry/Ginny, Ron/Hermione and Malfoy are growing up themselves and off to Hogwarts.

And Big and I have been moving our way through Harry Potter Lego Wii. He will have experienced the whole Harry Potter series exactly opposite of the way that Ten and I experienced it, beginning with Wii, then to the movies and (hopefully) to the books themselves.

And, the pièces de résistance? They are BOTH planning to be Hermione for Halloween.

Anyway, so I had splurged a bit, to avoid a second trip and the holiday rush, and stowed it away in the back recesses of my closet.

In literally no less than 24 hours, Big comes rushing in the kitchen to tell me that there is a HUGE HARRY POTTER LEGO SET IN MY CLOSET AND DID I WANT TO COME AND SEE IT???

In ten years we have nearly had birthday and Christmas presents in PLAIN SIGHT with Ten around, not aware of it.

I guess we'll have to get smarter.

Again.
Posted by giddings at 7:24 PM No comments:

Compartmentalization and It Gets Better

I've been so busy lately that I've completely compartmentalized all of the gay teen suicides (we've had a couple in Wisconsin lately), violence, and don't-ask-don't tell first nonsense then victory.

Until the other day when I suddenly remembered my first girlfriend.

A few of my readers are high-school friends who also knew Janet.

We were each other's first kiss in the summer (was it before?) of our sophomore year. I have no idea if she would have, ultimately, lived as a lesbian.*

Sophomore year was a hard one for us (isn't it for everyone?). Kids suspected, teased, wrote graffiti on our lockers. I suppose we'd call that bullying now, but we didn't think much of it then. Not enough to really even go to an authority about it.

We had falling outs.

We competed for the same slot in the winning 3200 meter relay.

If we had had statistics back then, I'm sure she would never have even been counted as a gay-teen suicide.

Again, I'm not even sure she was, really, gay.

I wish I could talk to her now and show her that, one way or another, it gets better.

*According to the Williams Institute, something like 9 percent of adults either identify as gay, lesbian, or bisexual, or report having had same-sex sexual experiences.
Posted by giddings at 10:06 AM No comments:

Okcupid on Gays and the Numbers

Check out this excellent post from the OKcupid blog. They are a dating site and have information on literally millions of users.

These are statisticians for the good!
Posted by giddings at 6:34 PM No comments:

Big and I Made the Walker Art Center's Annual Report! 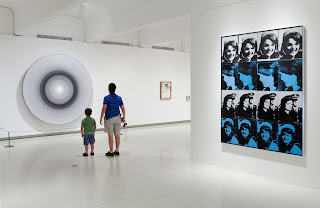 Posted by giddings at 1:38 PM No comments: 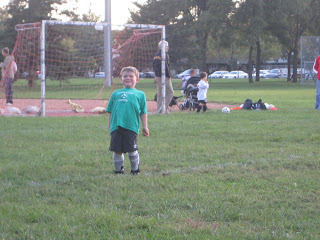 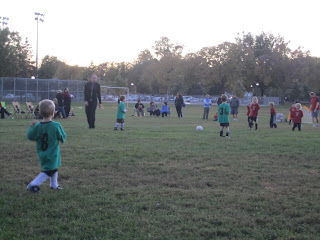 He played games on Wednesdays and Fridays and, had Cousin et al. not moved, he would have played ON Cousin's girl's team.

Anyway, Wednesdays were difficult for us. We were busy with work, and soccer put his bedtime at after 8, which is never good for our kids. So, I would often sort of run by the possibility of skipping soccer on any particular Wednesday, to Big.

Two weeks ago, he told me, emphatically, that "if it is available [meaning soccer], I want to go!"

And the following week he said (not as snarky as this sounds) "do you remember what I said last week?"
Posted by giddings at 8:42 PM No comments:

The BMX Trip that Went Bad

So the other day we took the kids and Four-of-Four to a BMX track to mess around a little. Here's another video. I thought it would be a little more accessible than a mountain bike route for our four year old.

Little did I know how difficult it would be!

After a few attempts, we all overcame some fears and got over hills we never expected to get over.

It all went bad, however, when, rushing home, we saw out of the rearview that instead of having three bikes attached, there were only two.

So we got the DVD's in the mail the other day.

It sort of spooks me out that the archbishop considers me enough of a catholic to even bother to send me anything in the mail.

Ironically, however, we got TWO copies, one addressed to both of our names, separately, the other addressed to, get this: Lisa and Sheila BioMom'sLastName. See photos attached. 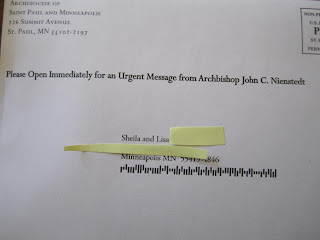 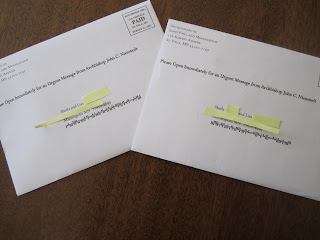 One option, for those of you wondering what to do with your dvds, assuming you aren't using them for entertainment or educational purposes, there is a group of concerned Catholics are collecting copies of the DVD to return to the Bishops and will make a financial donation to an organization that works to serve the poor in our area for every DVD collected. We are also asking other caring Catholics to consider making a donation of their own to help the poor in Minnesota.

Go to www.ReturnTheDVD.org to find more information on where to send your DVD, and how to make donations yourself to organizations doing the real work of Christ.
Posted by giddings at 8:04 PM No comments: