What Would the Harper Valley PTA Do?

Tom T Hall, Harper Valley P.T.A. Lyrics
Looking for Tom T Hall tabs and chords? Browse alphabet (above)
The note said, "Mrs. Johnson, you're wearing your dresses way too high It's reported you've been drinking and a-runnin' 'round with men and going wild And we don't believe you ought to be bringing up your little girl this way. It was signed by the secretary, Harper Valley P.T.A. Tom T. Hall, "Harper Valley P.T.A."

I am so not a joiner.

No. Seriously. I rarely join anything generally, but when I do, I usually end up cutting off ties blaming beurocratic red tape, institutional sluggishness and either too much or too little activism on behalf of the group for wasting my time.

I wonder if that is a common trait for academics who can normally hole up in their office and spend their lives working with data that someone else collected.

I must be, however, turning over a new leaf that even Tom T. Hall, author of that old ditty, "Harper Valley PTA", could never have imagined. Because of an invitation by an amazing mom in Seven's second grade class, I have become, I suspect, the first out lesbian to co-chair the vice presidency of the parent organization of our little neighborhood catholic school.

We may get some notes home, but I doubt it'll be about the length of my dresses.

So, BioMom and I's meager attempt to distinguish ourself to the kids in a manner other than the confusing (to us) "Mama" and "Mommy" seems to have failed miserably.

I've discussed the "name game" on this blog quite a lot (see The Big Questions page for background reading) and it has been a fairly serious issue at our household since Big came along and somewhat of an issue prior to that. Since I met Seven when she was 18 months old, we were careful not to force anything on her and as my inaugural post discusses, I was glad to be called anything by her -- just happy to be welcomed into the family.

Since that time, I have evolved into a semi-stay-at-home-mom (more on that and on the new title of the blog to come) and, as a result, spend more time at home with both kids than does BioMom. Seven, a few years back, started calling me "Mom" on average more than BioMom--to BioMom's sometimes dissapointment, sometimes relief as "MOM!" is usually followed by some sort of need or request.

Since Big, we've made an effort to say "Mama" and "Baba" on a regular basis. And since he's become more aware of the world, we often ask him where people are and get a little chubby finger point as a response as in "Where's Mama/Baba?" (point to her/me), or "Where's sissy?" (point to her) etc.

The problem is that Seven just doesn't use the term Baba. And, frankly, neither does the rest of the world.

Only in the last two weeks has Big really adopted the term "Mama." And, like any other skill, once learned, he is using it seemingly non-stop and with increasing intensity, as in:

He refuses to say "Baba" out loud.

I suspect this is due to one of possibly two explanations:

1.The Imitator: he aspires to be to be "all-things-Big-Sister-is"
or
2. The Economist's Son: he's being efficient and can get two for the price of one as we both respond.

Maybe he just uses it as a catch all, like his ASL sign for "more". To him, maybe "Mama" stands for the following: 'I need' or 'I want' or 'Get me outta this freakin' crib already!!'
Posted by giddings at 1:34 PM 5 comments: 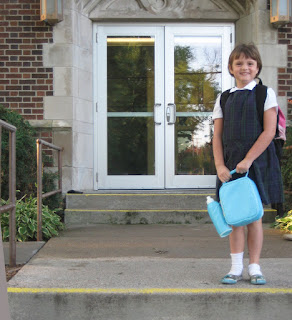 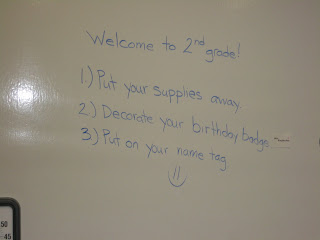 Below are some images of first days of years gone by (first grade and kindergarten respectively). 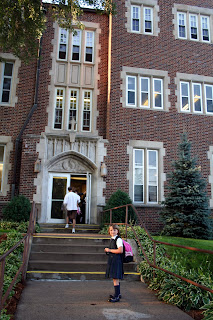 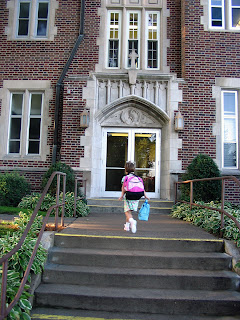 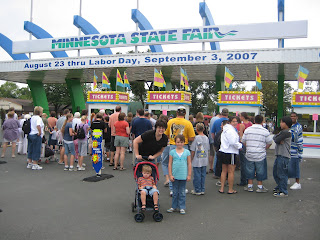 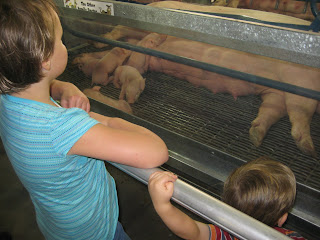 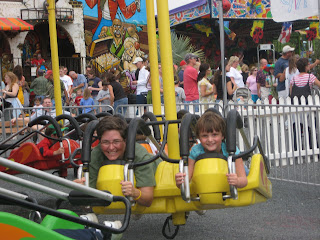 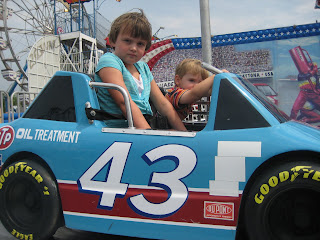 We ventured to the Great Minnesota Get-Together yesterday for some end-of-summer fun.

I love the Minnesota State Fair as much as the next guy, but having seen it only through kids' eyes (and their tired legs), you'll have to pardon my non-native cynicism over the event. Rushing, as we were, because Big can only last so long, it felt like a short-hurdle-sprint from one high fructose food item to another high fat food item interspersed with rickety kids rides. After just having had Tiny Tim's Donuts, for example, Seven's eyes happened upon a Cotton Candy stand, which was follwed by the predictable refrain "Can I have some ______?" Insert here, "cotton candy."

We were heading down to the Midway gaming isle for our annual spend-a-bucket-load-of-money-on-rigged-games-to-win-a-soon-to-be-forgotten-
stuffed-animal-valued at-approximately-$0.10 (My cynicism is actually too heavy handed here. This is a blast) when Seven came across a five-dollar-bill on the ground. We spent a bit of time looking around the crowd to see if anyone had possibly known that they had dropped anything before claiming the cash for our own and explaining the concept of 'dumb luck' to Seven.

On to more of the beg/spend/eat cycle.

On the walk out, sweaty and exhausted, Seven strolled a few paces behind, sad to see the day and, effectively, her summer, end as she starts SECOND grade tomorrow. At one point she saw a man on the corner asking for money--a man that BioMom and I had not even really noticed. Without hesitation, she dropped her five into his little cup.

Her lack of attachment to things is saintlike and, well, refreshing.

In response to asking her motivations around the gift she said, He needed it more than I did.
Posted by giddings at 11:24 AM 2 comments:

Because potty training was so (ahem) challenging for all of us the first time around, we are simply not discouraging Big in his nascent interest in "the potty" and his more urgent interest in all-things-not-toddler (including booster seats in the car and not wearing diapers).

As I previously posted, once he acquired the word "PEW-OOP!", he let us know that he clearly has an awareness of from WHERE it comes and, recently, has been announcing pending BMs. Following his lead, I pulled out the old potty and the corresponding book that discusses what one does with the potty which we perused, delightfully, together.

Tonight, after taking a bath, we were playing trains and I was attempting to cajole him into his diaper and pajamas. At one point, I noticed that look in his eyes and asked him if he needed to go "PEW-OOP". He immediately got up and ran into the bathroom, me bumbling to my feet and racing behind. Once in the bathroom, he backed into the potty and I sat opposite him on our own, larger version for approximately 0.3 seconds after which he hopped up and then ran back into the playroom, looking back over his shoulder at me as if to say "Aren't you coming???"

Once back with the trains, Cousin called, and in the time it took to say "hello", Big had kneeled on the carpet and released his bowles. Let me clarify: released his bowles on the floor. I should have photographed for you all to see for yourselves. At least it was adult-like in form and substance (read: easy to pick up). This turd, sitting on the rug as it did, as if just asking for Big to absentmindedly turn his heel into it, may literally haunt me like those of the protagonist's Parkinson's-suffering dad, Alfred Lambert, in Jonathan Franzen's The Corrections.

By the time I carefully wrapped it into the clean diaper that had been intended for him and toted it to the toilet, gave him an encouraging "high five" (keeping in mind the potty-training mantra to 'keep it positive'), and tried again to wheedle him into the diaper, he leaned over and peed all over the floor.

And Baby You Can Sleep While I Drive 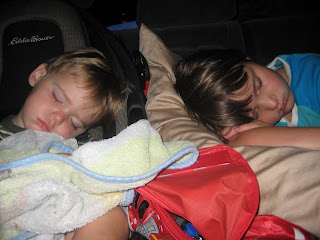 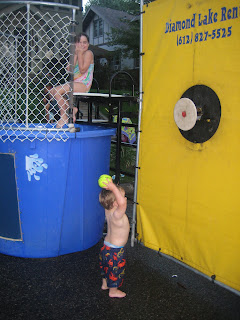 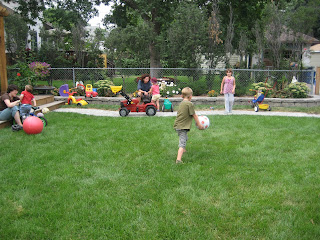 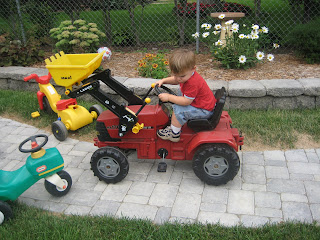 You're TWENTY MONTHS old today, Big. I think that that is officially too many months to be saying that you are "X months" when people ask, so today I told someone that you were "almost two." The gal told me that her kid was 22 months and that she knew someone who celebrated their 1000th day.

Once when BioMom took Seven (who was then "almost two") to Florida via plane, someone asked how old she was as she had a vocabulary of an english grad student. BioMom responded by saying "she's one!"

If I had to be honest to these Park-Moms, I'd have to say that you are twenty (months)-going-on-four (years). Ever since I took you too one of those little tester-classes at The Little Gym, you think you can jump or swing from anything.

You've taken to treating me as your own personal chariot, rushing around while we're walking, so that we are face-to-face, holding up your arms, grunting until I pick you up, then pointing and swinging your body toward where you would like to go, presumably in an effort to save energy or to move more expiditiously.

I'm not a fan as you're quickly approaching 35 lbs.

Your language continues to grow, however languidly. You clearly get everything, but you just keep most of it yourself. Although I did hear a clear "hot!" out of you the other day as you hopped across the sweltering deck toward the sprinkler.

The pictures posted here show more summer fun. The other night at National Night Out you really wanted to get dunked in the dunking machine, but settled for trying to get your sister; kickball with Cousin and kids, and your new tracktor from the Family-with-Four-Kids.

It feels like the adventure with you is just beginning.
Posted by giddings at 7:56 PM No comments:

P.S. I forgot the addition of one new word, an emphatic "POOP!" (pron: pew-oop) with the accompanied pointing and exclamating ("PEW-OOP! PEW-OOP!") in the general direction of the source of such substance on any being, especially the cats upon whom there is special attention and attempts at touching.
Posted by giddings at 2:22 PM No comments:

Bridges, Birthdays and other Catastrophes. . .

For those friends and family with whom I have not yet connected tonight, we're all okay. Seven and BioMom were downtown all day today, but came home early and, because we live south of the city, never passed over the bridge that collapsed. We're fixated to the news and our communication devices, hoping that all of our loved ones are okay, and praying for everyone else.

Tomorrow is my birthday. Not one that is particularly significant. But it feels so in that it is literally the first birthday that I don't personally care about -- well not in terms of myself anyway. Maybe that feeling itself is a mark of growing older. . . Like enjoying nuts in your brownies and on ice cream or taking two days to mow the lawn.

A few weeks ago BioMom was badgering me for some gift ideas and I literally could think of nothing. Furthermore, in terms of birthday activities, I can't imagine a better day than spending it with Seven, Big, BioMom, Cousin and her kids (they're coming tomorrow!).

Seven (incredulously): How can you not want anything for your birthday!?!

Me: I dunno. I just can't think of anything that I need or want.

Me (surrepticiously behind BioMom's back): What if I asked for that Hanna Montana CD that you've been wanting for my birthday?

She (incredulously): YOU WOULD DO THAT??

Me (to myself): Getting to be your kid's hero for your birthday? Priceless.
Posted by giddings at 7:34 PM 6 comments: