Check out the Onion's spoof on this -- particularly the comments.
Posted by giddings at 8:34 AM No comments:

Even for the Non-Economists. . .

Check out this incredibly funny YouTube video explaining the Federal Reserve's recent actions. This is a great one for even those non-economists out there.
Posted by giddings at 7:29 AM No comments: 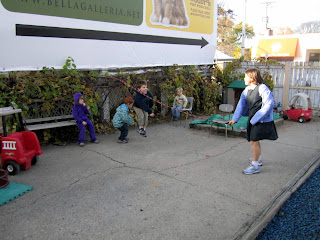 Big is in his second year of preschool.

It is amazing to watch him grow intellectually and emotionally. One day I showed up and he was jumping rope like a maniac.

And now these past few days he is learning how to snap his fingers, practicing incessantly.

I love when we are reading and he asks about something about which he has never heard: the other night was peanut brittle.

Last night, after the bedtime routine while I was tucking him in, he asked "What is a necessity?"

Maybe he has just become adept at extending the routine because this naturally lead into a discussion that not only defined necessity (a good that you NEED), but also it's opposite (luxury: a good that you WANT but don't NEED) as well as a discussion about another category that Big brought up that has yet to be defined explicitly by economists: the good that you NEED but don't WANT (vegetables).
Posted by giddings at 10:22 AM No comments:

Why Do People Care So Much What Other People Do??? 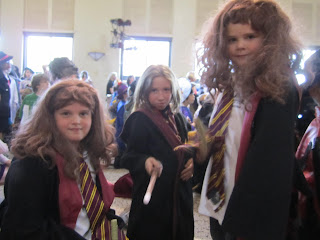 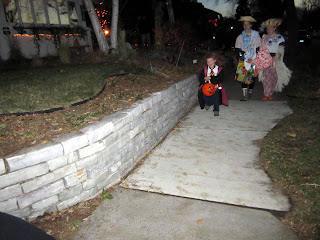 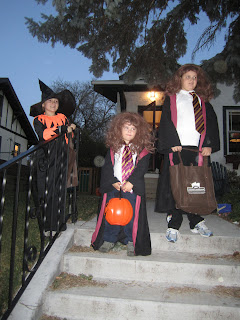 NerdyAppleBottom has been all over the news lately about the post she wrote about her son's awesome Halloween costume.

I loved the post with its rather antagonistic (to some) title "My Son Is Gay". It was sure to get some attention. But whoa. Seriously, people are freaking out about this.

My main question, other than the obvious ones that in I'll get to, is why do people care so much what other people do?

It seems to me that we should only really care what other people do if what they do affects us in some way or another. Economists call this "externalities" or spillover effects. Even the Ninth Circuit, expecting that the Prop 8 supporters in California will appeal Judge Walker's reversal of the anti-gay marriage law that narrowly passed in 2008, requires that the appellants have "standing":

Standing is a legal doctrine with roots in the Constitution's Article III that requires a plaintiff to show harm or injury. "Essence of standing is that no person is entitled to assail the constitutionality of an ordinance or statute except as he himself is adversely affected by it," explains Black's Law Dictionary, an authoritative legal guide.

So how is this kid, dressed as Daphne from Scooby Doo, for ONE DAY affecting YOU???

Firstly, the kid is probably not gay.

As it turns out, a precious few of us on this planet are gay.

Statistically speaking, that number is WAY less than Kinsey surmised (at 10%), probably reaching somewhere less than even four percent and differing for men and women.

Secondly, though the debate about whether being gay is caused by nature or nurture (biology or socialization) has not yet been definitively concluded, we know that you can't really MAKE someone gay.

And for that matter, you can't MAKE someone NOT gay.

So, regardless about this FIVE YEAR OLD's sexuality, what do you think would have been the psycho-social-emotional effect on him had his mom told him that it was inappropriate to be Daphne and that instead he should be Iron Man or some other gender-appropriate costume?

I suspect the effect would have been FAR more long-reaching and negative.

Speaking of letting people do what they want, I also just heard about a couple in London seeking a civil union rather than marriage.

Can we just come to this agreement? I'll stay out of your business (including your religion and how you want to decorate your backyard) if you stay out of mine and just let me have my legal rights as a citizen of this fine country.
Posted by giddings at 5:44 AM 1 comment: 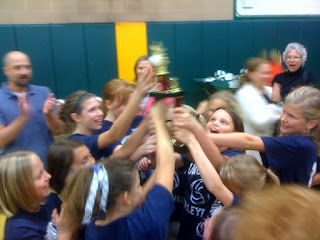 This fall has been a whirlwind, but this past weekend we slowed down. . . Inadvertently.

Ten is on her school's fifth grade volleyball team.

There are so many girls in her grade that are interested in the sport that they had to create two teams.

Anyway, her team has always been the Bad News Bears of the two.

So, this past Saturday they had a little tournament among the catholic schools in the area. There were three brackets and we had literally planned our day around Ten's team loosing in the first round (I was so unprepared, that the picture above was taken with my phone! I didn't even have a camera with me!?!)

When they won, we readjusted, and at an impromptu, unplanned lunch near the tournament (we had one half unexpected hour until the second game) we discouraged Ten from even considering winning the second match and heading to the finals!

And then they won the second match and were heading to the finals!

BioMom was so excited --she had never participated in any sports tournament in her life (either as participant or spectator) and, with one of her own in it, she realized how incredible it was.

We were on the edge of our seat as the last match started. Could they possibly win???

It turned out to be the easiest of the three -- they won in two games!

So that was our day: three exciting volleyball games culminating in a trophy!

Pictures of Halloween to come. The kids had a blast, and then posted 102 degree fevers for the next three days!
Posted by giddings at 7:44 AM No comments: