So, for Valentine's day I don't really think about the kids. BioMOm's my valentine, and that's that in my opinion.

She got them both little gifties to celebrate the day.

Unfortunately for her, she doesn't get the credit.

Nine opened up her little heart necklace and said: "Thanks Baba!"

And when Big found a small version of Chutes and Ladders, he gave me a huge hug.

I just beamed, choosing not to correct their mistakes.

We tore open the game and some chocolate hearts and played a round, Nine tromping us all having landed on the longest ladder and avoiding all chutes.

Sometimes I think that being a girl makes raising a girl more difficult.

BioMom and I went into tag-team formation.

We bulldozed her with our overwhelming reaction to the comment. And I mean that in a self-reprehensive way. We definitely did not handle it well. Is that what you think about her? What would someone think who heard you say that? What did you mean by that? Ugh. It was bad. She initially denied saying it, we went into blah blah blah lectures about media images and women and how women then feel about themselves etc.

I got back to her later when we were both a bit removed.

It is really a complicated message we send to young girls. On the one hand we harp about eating healthy and not too much. To eat less sugar and pop. With Nine we pay attention to carbs, knowing that like us, she tends toward overeating when it's really bad for you and yummy. And knowing that she just does better in school when she's got some protein under her belt in the morning.

We never talk about being fat although she'd have to be deaf to not hear BioMom and I's own personal concerns when we know we've had a bad few months and gained a few unwanted pounds.

So now we're harping that fat is basically the equivalent of a swear word and our arguments were steeped in complicated feminist rhetoric.

How do all of you react to your girls' reactions to society? What do you do when they pick up the negatives you wish you could shield them from?
Posted by giddings at 6:27 PM 2 comments:

So Kelly, over at The Lesbian Lifestyle notified me today that this blog has been nominated for an award for lesbian parenting blogs.

I've never much thought about blogger awards other than to use them to navigate toward good writing and different perspectives that I would not find on my own, so I am humbled and excited about this. I've thought of this blog mostly as an 'in the parenting trenches' sort of blog as opposed to one that people perhaps turn to when they need real information or help. But I guess that just hearing from others of us that are in the trenches helps.

I hope so at least.

If you're inclined, nominate and vote. If you're too in the trenches, or just busy watching the Olympics (Lindsey's on right now, who, after the Sports Illustrated cover, has become more interesting to me), no biggie.
Posted by giddings at 6:16 PM No comments: 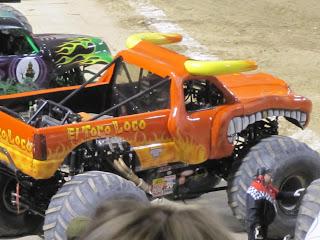 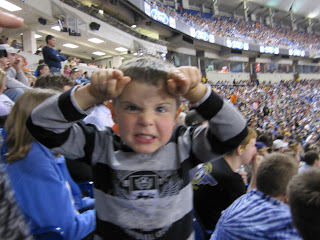 Yes... We did, in fact, attend the Hottest Show on WHEELS WHEELS WHEELS!
Posted by giddings at 3:05 PM 2 comments:

Apologies for the lack of posts. I'll tell you what I've been doing, but be prepared, the description is soporific.

I've been working on a project on Tajikistan. My advisor and I have a revise and resubmit to Feminist Economics which is highly ironic. The journal is seen as fairly low ranking among most economists (I think). What does this mean? Well, it means that when you are putting a journal article that was published there on your "brag sheet" that the people in your department think to themselves "I'll count this but I KNOW it was an easy pub so in my heart, I'll really discount it. . . ."

And why does THAT matter? Well, discounts over time add up to possibly not getting promoted or getting less of an increase in your pay check.

The problem is that the topic we're looking into -- maternal health (which is, by the way an important component of the Millenium Development Goals) -- is perfectly suited for that particular journal.

So the irony? It ends up being a REALLY difficult journal to get into.

Once we were working on a project on the Czech Republic. We sent it off to the best journal on the topic of transition economics. Got a revise and resubmit. Revised and resubmitted and then got a rejection. Then we went on to Feminist Economics. Same story.

And yes, that was many months of work for an outright ultimate rejection.

So here we are again.

I've been working on preparing the latest data released from Tajikistan (seriously). Which has entailed writing some code on household expenditures that is normally already provided by the World Bank but in this case is not yet ready.

So this is an example of what ended up being a 19 page document that took me a bunch of time (hence no blogging):

It goes on and on.

The other day Nine (nearly Ten!) explained to me that they were learning about the Mean (i.e. the average) in math that day.

I'm a total math nerd. I love it. I'm in the middle of a book called The Big Questions in which the author essentially thinks that math is religion and can explain everything. That everything can be boiled down to math. I'm also teaching a math class at Macalester College at the moment, so I'm obsessed.

Anyway, I couldn't resist talking to her about the Normal Distribution because, well, it IS related to the mean and because I happen to be in love with two interesting and related topics:
1. The Law of Large Numbers
and
2. The Central Limit Theorem.

When her eyes glazed over I wrapped it up by talking to her about the two symbols that I know of that mean "mean": x-bar and mu.

Her response was that she knew another symbol for "mean".

I asked what it was, genuinely curious.

She drew a little face with slanty eyebrows.