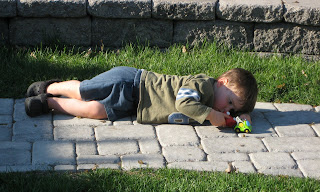 This newsletter is about a week late, but I'll blame that on you, honey, as you are seriously in the throws of being two.

That and finals and a research deadline and volunteering at your sister's school....

I've finally realized why I'm slowly losing my mind, or at least acquiring a disproportionate amount of gray hair, Big. Basically, if one of us (BioMom or I, or some other caretaker) is not directly watching you, SOMETHING happens. It may be as small as you peeing all over the floor, or picking on the cat, or getting into your sister's paint, or gum stash or, as we regrettably found out a little to late the other night, that you can now open the gates in our backyard on your own (we found you, luckily, moseying down the sidewalk on the little blue Carebear trike that your grandpa gave you -- as opposed to underneath the tire of a moving car, or in the back of some windowless white van accompanied with a ransom request).

You're nearly two-and-a-half years old now and sometimes I look at you and I see this stretched out, tallish-looking KID, and it's really weird. And that's just LOOKING at you. Watching you and listening to you just exaggerates it. You're really competent physically and, well, it's a bit of a relief to me. Just today, I watched you crawl all over a neighbor's backyard jungle-gym-ish sort of thing and, although I watched you carefully, I no longer panic at the thought of you climbing higher than me and possibly falling. I know that you can either handle it, or the fall.

You've started that two-and-a-half year old semi-sensical babble that is so fun to try to decipher. BioMom will ask you about your day and I love to listen to what you remember, what affected you, and what bubbles up from past experiences. Sometimes you'll totally bust me. Yesterday, for example, we ran into Father and Mother of Four (who were, incidentally looking for their ten year old who had gotten off the bus at the wrong stop and was casually making his way back home, despite his own serious homework deadlines and not telling his parents of his plans ahead of time). Father-of-Four commented on my clean car when you started telling them about all of the garbage I put in the back and front seat during my stealth mission to discard of the yard waste that the city hadn't picked up in a month.


Lately, when something is important to you, say, you don't want to share a recent garage-sale purchased truck with your sister, you say "It's for Easter!" emphatically. Other times, people and events will randomly bubble out. My brother just visited for Eight's first communion (!) and you wander around the house saying "Uncle Mike".

You call those windy slides at parks the "Tomato Slide" because you heard someone else call it the "Tornado Slide".

It now takes us nearly 45 minutes to get to the park that is just 4 blocks away. You refuse to ride in the Burly (to my great chagrin as I just got a new mountain bike with my BushII-economic-stimulus package), a wagon, a stroller, or even your own vehicle after a block or so. You get distracted by every dandelion, signpost, anthills in the sidewalk, bird, or blade of grass, and you whine until I carry you on my shoulders, which, has become increasingly difficult as you are as dense as a black hole.

You're really happy. Any tough spots or "tantrums" are really short-lived and usually solved with a little snack or sleep. And although I do like to get stuff done or just read a bit during your naps, I literally run up the stairs to get you when I hear you stirring from your nap. 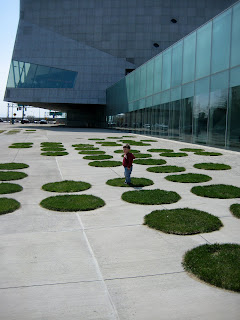 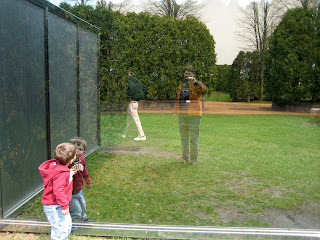 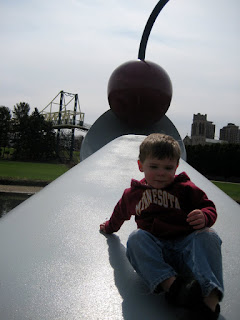 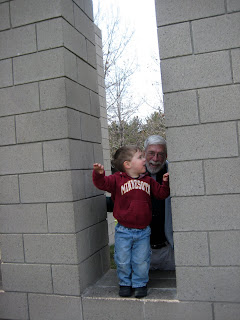