The Boy Is As High As An Elephant's Eye

And it looks like he's climbing right into the sky!!! 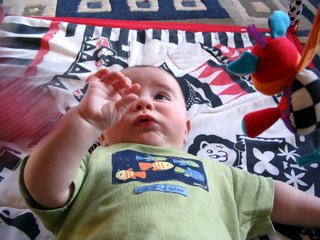 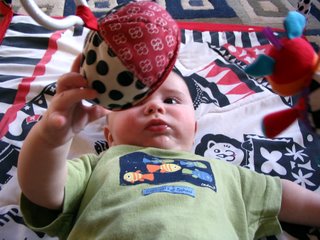 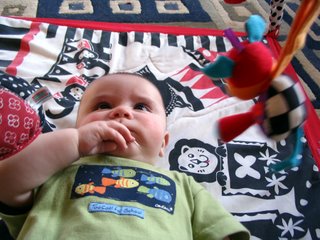 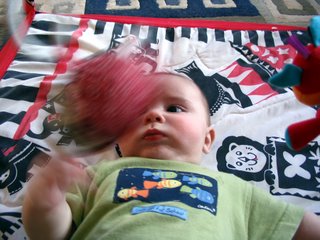 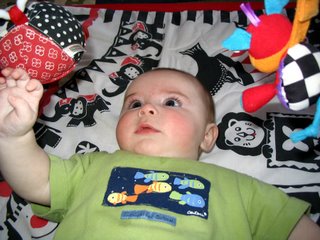 What a four months it has been! I've been told by at least one reader that the blog's been a little short on text lately. Its not for material. Its just that usually when I sit down to blog I'm also holding the young man as he's napping. Typing with one hand is just not, well, its just not satisfying.

I think we've finally figured him out. Four months later. Putting my feminist roots aside, I've been engrossed in the book Why Gender Matters: What Parents and Teachers Need to Know about the Emerging Science of Sex Differences by Leonard Sax. Let me preface this discussion by saying that my understanding of child development is quite slim, and I have not even finished this book let alone any of its critiques. So far, however, I am quite enjoying its explicit critique of the politically correct notion (one that I have believed whole heartedly) that gender is entirely socially constructed.

Basically, the author is putting forth the scientific evidence that boys and girls are simply hard-wired differently from our brains to the cells in our eyes. It is fascinating. I'm taking it to heart, too, making more efforts to wear the boy out every day with long walks and lots of play.

Let me also say that I'm not becoming a Lawrence Summers fan after reading this. I'd like to see a melding of the two theories, and, again, I'm not far enough in the book to say, but the author does not seem to condone sex(ist) stereotypes. He, for example discusses the concept of 'learned helplessness' which basically argues that we don't give our girls enough challenges so when they are faced with some they give up too easily. He just seems to be providing us information about biology and how we can deal with that as parents and teachers. For example, rather than trying to push away (some) boy's need for action and agression, we need to figure out creative ways to feed those desires.

I'd also love to see what anyone else thinks out there.

I just took the boy around the lake in the lovely 65 degree sunshine. He didn't sleep a wink while we were on the walk -- too much to see. But he's out cold now snoozing in the familiar.
Posted by giddings at 3:08 PM

The topic of gender and nature vs. nurture is something that is fascinating to me too.

A true story exploring this issue is documented in the book As Nature Made Him: The Boy Who Was Raised as a Girl by John Colapinto. There is a NOVA documentary by the same title available at the library.

The story really throws the politically correct notion (one that I had wholeheartedly embraced) out the window.

~ she who was named after a famous mythical princess

I'd be interested in checking this book out. One of my top 3 mom-related anxieties is about sex stereotyping in our culture and how it will screw up my daughter. I don't want her to turn 12 and exchange her library card for make-up and hoochie mama clothes.

I feel like I'm already constantly battling what I like to call the Sea of Pink that wants to engulf her in all things barbie. I was in Baby Gap today as a matter of fact and just shook my head at the aggressive separation of BOYS and GIRLS clothes. Boys' clothes look like they are made for running, climbing, and getting dirty. Girls' clothes are all about being cute and dainty.

It makes me want to scream.

Anyway, I'd like to be better educated about the whole nature/nuture thing myself.

Having nurtured (pun intended) a keen interest in gender for quite some time now, I taped that NOVA program. Unbelievable story.

So far in Gender Matters, he claims that gender is a more important category than sexuality. For example, he claims that a 'masculine' girl has more in common with a 'feminine' girl than she does with -- and he makes this comparison, but I would not -- a gay boy. I wonder if he's looked at some of the biological studies that show some links between lesbian women and heterosexual men. I bring this up because in the book you mention, the boy who was raised as a girl comes out as a lesbian.

In college, for a literature class, I wrote a highly unappreciated paper focusing on the sexuality and level of sexual-ness in various author's texts ranging from Willa Cather to Kate Chopin. I'm really interested in the sex/sexuality/gender axes and if/how/where they overlap.

I totally believed that nurture was far more influencial....until.....I had a boy and a girl.

Now I appreciate nature a whole lot more! My daughter, being the youngest , is completely engulfed by boys' toys. And although she loves trains, trucks, cars, and sport equipment, she was completely overjoyed at age 3 to receive her first real "girl toys" doll, dollhouse, kitchenetc.

BTW, my 6 year old son plays with these toys just as much...he feeds the doll and changes it's diaper!