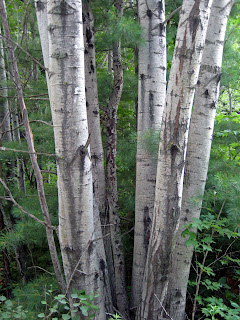 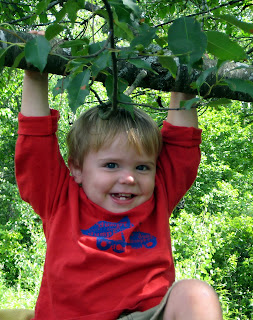 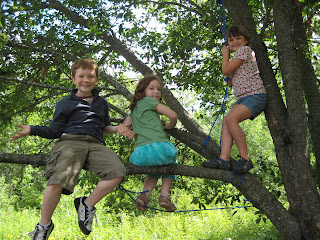 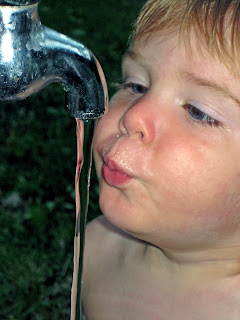 So, on a suggestion from Cousin, BioMom and I have been watching Big Love in our spare time.

On a camping trip with the Family-of-Four-Kids, we got to talking about the show, Mormons, and polygamy more generally. Seven, AKA "Big Ears" overheard some of the conversation and announced that she wanted to become a missionary when she grew up.

Yeah! A Missionary! said she.

What, exactly, does a missionary do, do you think?

Ah. I thought. Since reading Harriet The Spy last year, she's had an interest in such activities. It all made sense now.

On the way home from the camping trip (it was Big's first, and he has, I believe, been won over with the whole thing what with being outside 24/7, hiking, sleeping in tents with your WHOLE family, fires and, of course, s'mores) we stopped at a little pizza joint in a local town.

While waiting for our flat, we played "I See You" games with who we suspected was a lesbian and wondered if she was accompanied by a partner and possibly children.

Me to Seven: Want to go on a mission?

Me: Okay. Now, what I want you to do is to casually, I repeat, CASUALLY, walk by that family in the second booth up there behind that little wall. Let me know if the person facing THAT WAY (I point toward the street) is a girl like me, or if the person is a guy.

Me: Let us know if there are any kids.

BioMom: Yeah! We want to know if they are a family like ours.

Seven (nearly running with the excitement of SOMETHING TO DO), leaves.

She goes up the stairs in order to walk by so that she faces the more manly of the two suspected women. We see only Seven's head, and, as she walks by and looks (quite a bit more than casually, I must say) at her, her head followed the poor woman the entire way--practically straining her neck--as she walked by, obviously checking her out.

They were in fact a "rainbow family" and when I finally met the more manly of the two, she told me that our daughter had walked by and stared at her. She commented to her partner that the young girl had experienced "gender confusion". I clarified that no, it wasn't gender confusion, it was in fact, reconnaissance.
Posted by giddings at 3:43 PM

Nice spy work there. Your target had no idea what was going on :o)

Where were you camping? Just curious.

We just got back from a 4 day trip in Clear Lake, Iowa. I would have loved to run into another family like ours but we had no such luck.

Hi Vikki --
we were at Wild River State Park: http://www.dnr.state.mn.us/state_parks/wild_river/index.html

The gals we ran into also told me about a great book for those of us that used to do REAL camping (i.e. hike-ins). It looks great--descriptions of the sites, hikes, drive time, etc. Here's the title: http://www.amazon.com/Best-Tent-Camping-Minnesota-Concrete/dp/0897325737

I've been to Wild River. That was the first place we went camping with our son.

Next weekend, we are going to St. Croix state park. We've been there before so we know what to expect. We aren't feeling too adventurous this summer with the 2 year old.