So, before we had completely given in to consumerism in our parenting, we spent some energy putting off the American Girl Doll purchase for Eight who was, at the time, Five.

Big, for example, "brought" her a look-alike from seemingly inside the womb (or so she thought) when he was born. When friends of hers noticed that the doll she had was not associated with any official American Doll character, we tried to divert her attention (LOOK! A SHOOTING STAR! ala Lesbian Dad) or claim that this doll was, apparently, from a different catalog, but that only worked for so long.

It is not without irony then, that on the way home from dinner last night with MRM#1 and MRM#2's house (aka the Godfathers), he used this doll to torture his sister. This, ultimately discarded and unwanted doll, post arrival of THE American Girl doll. This doll that is usually used to placate her little brother when he wants to play with Kit, or when she has friends over and wants him to get out of her hair a bit, though he does all that he can to keep up with them. It is this doll that she uses.

So when I heard her wailing from the back seat, I had no idea what to expect when I turned around and saw this: 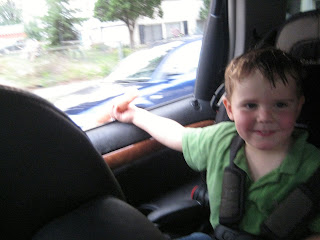 Note the casual way that his hand holds the doll's ankle while the doll itself swings precariously out the window of a moving vehicle and yes, while not the freeway, we were on a busy street.

Oh, and check out that shit-eating grin.

While attempting to squelch our howls, BioMom took pictures in the rearview: 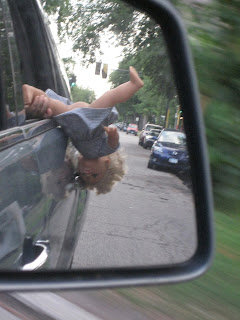 The photo I didn't take? His sister's reaction.
Posted by giddings at 11:37 AM

When I saw the picture I laughed so hard coffee came out my nose! The grin just says it all!
I am the oldest of 5 & I remember one of my brothers doing the same thing.

Me too! I honestly don't know where he gets his ideas. I have a mean streak too but geesch! He is just cruel!

This is too damn funny. I can also imagine just how hard it would be to contain your laughs.

HILARIOUS! Those younger siblings sure know how to get the older ones, don't they?