And People Think Economics is Boring

Whenever I'm at a party and people ask the "so, what do you do?" question (a much more prolific question while in the DC area BTW), and I respond, eyes glaze over.

I almost always retort with something to the effect of "at least I'm not an accountant!"

I should direct them to what A Random Walk drew my attention to this morning: an article by Caitlin Flanagan, and then (of course) to an economic-y oriented follow-up related article by Tim Harford published over at Slate.

The gist of the Atlantic article is this, despite the author's disbelief:

Somehow these girls have developed the indifferent attitude toward performing oral sex that one would associate with bitter, long-married women or streetwalkers. But they think of themselves as normal teenagers, version 2005.

It was like some weird search for communists-was the sweet, well-spoken daughter of a friend actually a blowjobber? I looked at the small girls in my children's schoolyard-as cosseted and protected and beloved a group of children as you will find anywhere on the planet-and tried to convince myself that in a matter of five or six years they would be performing oral sex on virtual strangers.

As an aside, she references the book I am currently reading in honor of Cousin's Mom (it is her favorite): The dearest book of my childhood, Betty Smith's A Tree Grows in Brooklyn, includes Francie's first period, but again, the novel's no upper: shortly after first blood Francie is assaulted by a pervert in a tenement hallway.

Here's the economist's response to this social and cultural shift:

But an economic explanation would instead start with the premise that this is a response to changing incentives. What sort of incentives have changed?

Schoolchildren are now bombarded with information about the risks of sex, particularly HIV/AIDS. Oral sex can be safer than penetrative sex: It dramatically reduces the risk of contracting HIV and reduces the effects of some other sexually transmitted infections (although you can still pick up herpes, warts, and thrush). An infection that might have made a girl infertile instead gives her a sore throat.

The rest is basic economics.

When the price of penetrative sex rises, rational teenagers seek substitutes. Perhaps we shouldn't be surprised that even as the oral-sex epidemic rages, the Centers for Disease Control and Prevention reports that the percentage of teenage virgins has risen by more than 15 percent since the beginning of the 1990s.

A real economist would want a tighter hypothesis and serious data to back it up. That economist might well be Thomas Stratmann, who, with law professor Jonathan Klick, has pushed the idea of the rational teenage sex drive. Their hypothesis is that if teenagers really did think about the consequences of their actions, they would have less risky sex if the cost of risky sex went up. They discovered a very specific source of that higher risk: "In some states, there are abortion-notification or -consent laws, which mean that teenagers can't get an abortion without at least one parent being informed or giving consent." If teenagers are rational, such laws would discourage risky sex among teens, relative to adults.

Klick and Stratmann claim to have found evidence of exactly this. Wherever and whenever abortion-notification laws have been passed, gonorrhoea rates in the teenage and adult populations start to diverge. When it becomes more troublesome to get an abortion, teenagers seem to cut back on unprotected sex.

This photo was sent by a friend with the title "BUSTED!" 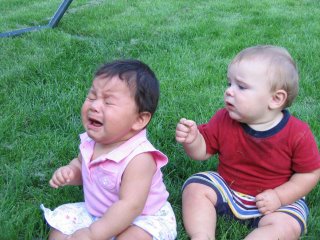 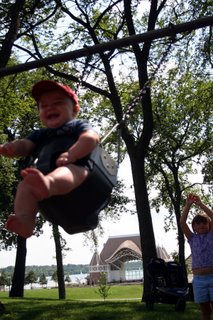