Cease and Inhale the Bouganvallia

I have been, thus far, extremely nonchalant and unconcerned about the relative lack of language development in Big. Relative to his still loquacious sister who, at his age was speaking plenty. At one point, whilst enjoying my morning coffee in the kitchen with BioMom and Seven (then 18 - 24 months, I'm not exactly sure when it was) I asked BioMom "What words doesn't she have?" BioMom responded: "I don't think any!" I then pointed to the microwave and the refrigerator an the girl had no clue as to what they were. A doll, however, who had lost her head, was referred to regularly as having been "decapatated."

There's just something blissfull about Big's lack of language.

Sure, he grunts and points and whines and squeels at things that he wants or injustices that he feels the need to express. But there's just something so, well, ambiguous about his desires that somehow refuses to assign responsibility to me to help him meet those wants. Sure, I might have a feeling that his insistent grunt and pointy finger means that he would prefer to be allowed to run into the middle of the street, but without language, I can mistake it for something else, perhaps a ball in the yard, and walk toward that instead of the moving vehicles, and soon, he is distracted.

A neighbor of our's little girl, a bit older than Big, has, of late, become quite gregarious. She is transitioning her to a half day or so of day care per week. Last week was her first day and I asked how it went. She said that her daughter, once they were again reunited (after only an hour or so) repeated "Mommy stay!"

I just don't want to hear Big say "Please don't leave me in my crib tonight, Baba! I'm terrified of being alone!" or something else to break my heart in two.

I fear, however, that the end of my blissful ignorance is near. Today at the park, Big walked up to said neighbor with a seeding dandelion* and said, in the clearest, highest-pitched pre-pubescent voice: "Flower."

It was so spontaneous and sweet. Another reminder to stop and smell them.

I fear most of all, for BioMom and I and, especially for Seven (upon whom he blames most perceived injustices), the negatives of his language development. This weekend for Mother's Day Lynn Johnston, writer and illustrator of For Better or For Worse, posted the following cartoon. The moral of the story? Get in all your road trips prior to the full development of the siblings' langugage.

*which is called, I just learned, a 'dandelion clock'. Wikipedia tells us that blowing this 'clock' apart is "a popular activity for children worldwide." In Germany, they call it a Pusteblume, translation: "blow flower." Not unlike the question, 'How many licks does it take to get to the center of a Tootsie Roll Pop?', the question about how many blows required to 'completely rid the clock of its seeds' is also asked around the world and is said to relate to the time of day. 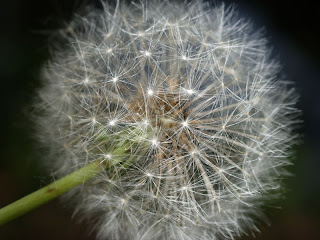