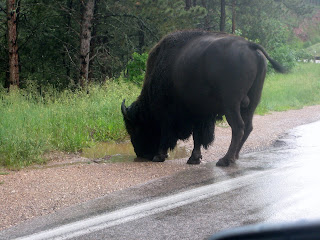 With the Badlands in our rear view mirror, and Finding Nemo on the DVD player with the voice of Ellen DeGeneres as Dori correcting the Marlin character when he observed the Whale's belly as being at least half empty ("actually, I see it as half full"), we sped toward Rapid City and Custer State Park (which Eight persistently referred to as "custard" state park) with a renewed, optimistic, sense of hope.

We had planned on traversing the distance between the national park and Mount Rushmore, grabbing lunch at the base of the "four faces" (upon the suggestion of Father-of-Four), checking into the "bunkhouse" at the State Game Lodge, (which, by the way, would turn out to be a charming room with eight single bunk beds) and then on to a Chuck-Wagon dinner by 5 p.m. That, plus I wanted to try to grab a Geocache along the way.

Optimism was not only uplifting, it was necessary.

Here are two pictures that capture the five minutes BEFORE 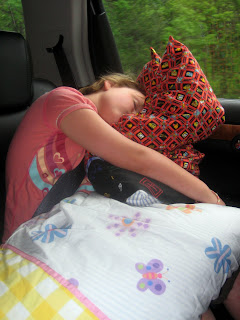 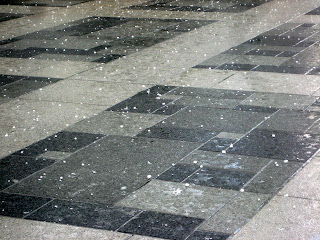 As I write this, I am sitting in the comfortable home of Cousin, recollecting the nearly 15 hours spent in the car. Of that time, the above picture is literally the ONLY time either kid slept. Eight fell asleep minutes before we rounded the last turn and saw George Washington's nose as though inviting all the nasophiliacs east of the Mississippi.

Then, within minutes of walking to the penultimate position for viewing the faces, it began to hail (talk about 'hail to the chief'!).

Big now reports the story by saying that the "four faces were sad." The rain actually made it look like they had tears on their cheeks: 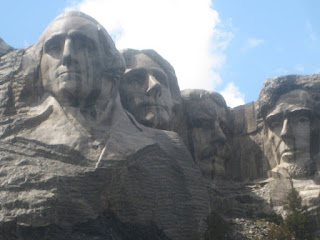 I remember really being in awe of the actual construction of the 'four faces' when I was little. Marvelling at the relative size of the people hanging from wires and platforms, hammering out the contours of Roosevelt's glasses, the pictures with Washington's face completed but only outlines of the others while the work was in progress. Eight seemed somewhat nonplussed about the whole affair, even after my pointing out the old-timey pictures of the mountain's pre and post-facial.

We left the monument and wound our way through the beginnings of Custer State Park toward our Chuck Wagon dinner through hairpin turns and single-lane tunnels that framed amazing views of the old mountains and one even of Mount Rushmore itself. 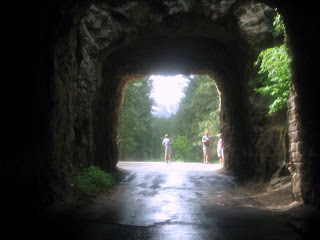 The Chuck Wagon dinner was one of those kitchy things we thought we couldn't pass up, but as we wound our way toward the ranch, the sky darkening with storm clouds and the clock inching toward Big's witching hour (that hour where his energy becomes spastic and somewhat uncontrollable), we began to regret the commitment (we prepaid dinner on the credit-card). 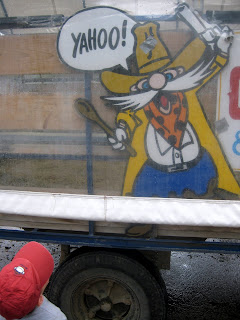 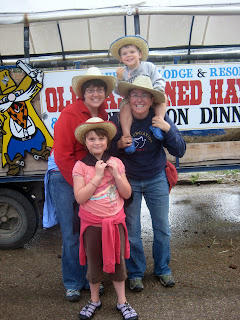 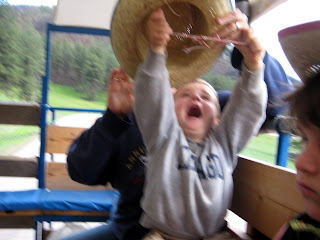 It ended up being a really fun evening, although the third picture in my previous triptich captures Big's mood as we rode the bumpy wagon around an entirely-too-long loop toward a steak dinner that he simply refused, choosing instead to play with his cars in the rocks below the table, taking small bites of my offerings, and returning them immediately to the bench above him. 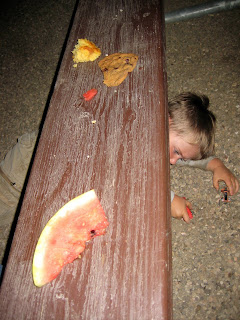 We had planned on leaving Custer for the next night, heading down to Hot Springs for the night in the KOA, but when BioMom re-read the email about the "kamp ground" which clarified the need to have 'brought your own sheets' we prolonged our stay at the lovely lodge in Custer, taking an entire day to play in the hills and explore Needles Highway, and Custer itself. It was a lovely break in the pace we had been setting, which, I realized, mirrored our own hectic life. We needed to slow down and smell the buffalo pies.

Sleep was much more comfortable, even in the bunk beds, and we woke to two happy siblings, enjoying a cup of milk and cartoons in an upper bunk together. 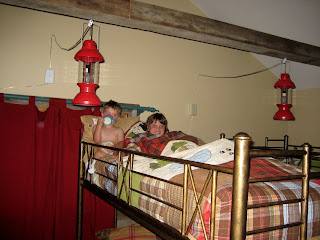 That afternoon we headed back north to Needles Highway. This is one of the parts of the vacation with Cousin and parents, taken thirty years ago that I remembered most vividly and so I drove slowly soaking it all in. Was I driving on the EXACT road that my parents took so many years earlier? How did they feel? What were they thinking? What were their plans for the day? It felt magical to me, as though I were somehow touching them, communicating with them and our lives together.

I remembered that at some point along the drive we had pulled over for a closer look. My parents were fairly cavalier about our safety and whereabouts (Cousin is seventh of seven and I am fourth of four, and seventeen years younger than the next oldest) so we entered into the needles themselves, climbing up, over, and around the narrow passages. At one point I remember feeling panicked. Where were we? And where was my mom? I could hear her whistling to us, seemingly close, but at the time I had no idea how to get back to her from inside the maze of rocks. We were lost.

Now, at thirty-eight, I wanted to find that place again.

We drove in and around, gasping at the scenery, when we went through another one lane tunnel. On the other side, many cars had gathered and we slowly drove past. Nothing looked familiar, so we drove on, but both BioMom and I had a gut feeling that that was the place to be, so we turned around, and headed back. No sooner were we out of the car, when we looked right and saw this: 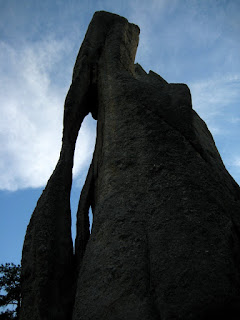 And knew we had found Needles Mecca.

We looked left when Big shouted: There's a peep rock!!! 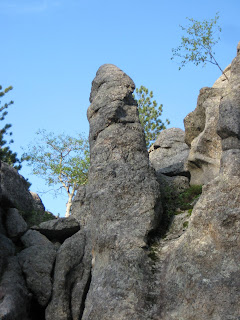 It was the only time I was happy we have not followed the P.C. parenting trend and used nicknames for their genetailia. 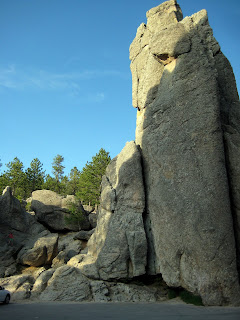 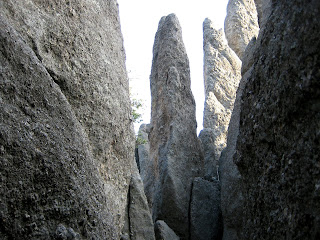 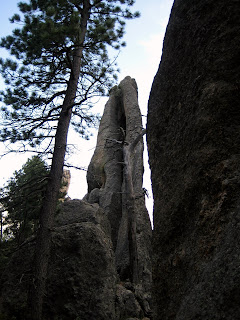 We climbed and squeezed through the rocks and I got lost in my memories of Mom, Dad and Cousin in the Needles. 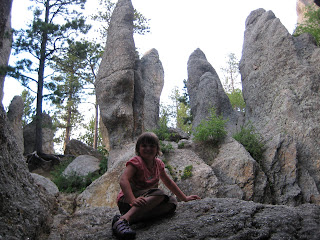 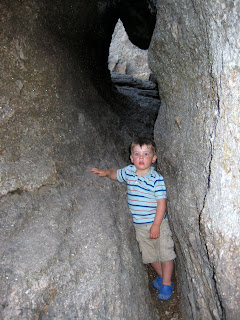