Balloons: Can Helium Improve My Attitude as Well? 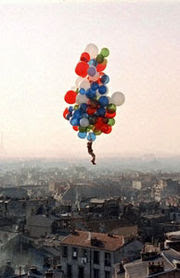 So this summer has been the Summer of Cousin.

For those of you that stay home with children 24-7, you know how simultaneously wonderful and challenging it can be.

I have been relishing, for example, this phase that Big is in where the following types of exchanges happen:

Me: Hey [Big], do you want to ride your bike up to the park and go swimming?

Big: Sure! [In this easy-breezy sort of way that tells me that he's just really up for anything I suggest].

In stark contrast is his sister who, just today, sitting in front of a cupcake, afire with a cute little specialized candle balancing atop the melting frosting, awaiting a blow-out from BioMom who turned #*@&Q*(& [number classified] today, with a face that was more cranky than a college student with a hangover sitting in front of a popquiz.

I don't think I have EVER heard "sure" come out of her mouth unless I had said something to the effect of, "hey, could you go answer the door? I think it is Nick Jonas!" and only because I followed that up with "And he is carrying a bag from Sebastian Joe's that looks suspiciously like several pints of ice cream!"

ONLY THEN, I suspect, would a casual "sure!" slip out of her mouth.

The one thing that has transmogrified all of this into the best-summer-ever is that I have been able to commiserate with Cousin in all of this summer-parenting-business.

Oh, and the vodka gimlets mentioned in a previous post.

They have certainly improved my attitude.

In any case, Cousin and I are of the same parenting ilk.

Maybe it was because we were both raised by cranky, overworked, underpaid, prewar parents.

So the other day, Cousin related this story to me, that made me have some hope in our ability to empathize with our young, bored, over-privileged children.

They had gone to Trader Joe's which, for children, is, I suspect, like going to any other grocery story (the culinary equivalent to adult-speak in Peanuts: Bwah bwah bwaa ba bwaah) except that the check out line promises the choice of any color helium-filled balloon.

Big, at his best, will often ask for two: one for him and one for his sister.

Cousin's eldest is a boy of seven who is usually quite composed and mature in a first-kid-living-up-to-parents'-too-high-expectations sort of way. Sure, he is goofy and silly and all that, but he doesn't seem seven.

So they got all the way home, two balloons intact when, upon trying to untwist them in order to transport them from car to home, one escaped out the open door, Cousin jumping and reaching after the slippery ribbon as it curled up into the sky.

Her boy broke down in unexpected tears.

That's when, as Cousin retold the story, I heard level of empathy out of her that I hadn't heard in a while, we parents of the end-of-summer dulldroms.

She said to me "I don't know if he was just exhausted and at his wit's end, or if accidentally letting go and losing your balloon is just that sad, regardless of your age."

I guess there is hope for us yet to make it through to the start of school without wringing their necks (too much).
Posted by giddings at 5:59 PM