On Following the Actions and Advice of Adults

We've been having an ongoing discussion with the SYO lately on listening to her own internal voice in order to gauge "right" and "wrong".

This discussion followed a couple of interesting events.

The first occurred after the little black cat had escaped through the front door into the outside world for the fifth time in a day.

A raucus "Goddamnit!" poured out of the SYO's mouth.

If you haven't heard that, from a six year old's mouth, let me just say that it sounds entirely different than from the mouth of an adult. Furthermore, it is like holding up this huge mirror in front of your face. A mirror with bright halogen lights like the ones placed conspiritorially in swimsuit changing rooms. A mirror that shows all of your blackheads, wrinkles and tartar.

The second incident involved two neighborhood girls and our little angel. They were running around in the front yard in the dusk, stealing a few minutes of play before beadtime as we chatted outside with some parents.

They had run out of my view, behind our front hill. I noticed a woman walking her dog and soon after the girls came running back to us. At the time I thought nothing of it.

That night the SYO relayed to us what had transpired with the dog walker and her two neighborhood pals.

Apparently they had been together shaking a new little tree on our boulevard and the woman told them that they shouldn't shake it. One particularly headstrong girl of the three apparently continued to shake it despite the stranger's warning (although the details on this were slightly unclear. I'm sure that the SYO's story was designed to present her best side.). What came next astonished our SYO: the stranger muttered back "What a naughty little girl!"

In her story, the SYO was appalled! How could a stranger tell THEM what to do? She wasn't their parent, after all.

Alone, I coached the SYO after she proclaimed innocence from either a) saying the bad word (SYO: I ALWAYS follow your lead! BioMom: Then why don't you get out of the pool when we ask?) and b) that you always say not to listen to strangers!

I talked with her a bit about listening to her "heart of hearts" and that what is "right" and "wrong" doesn't necessarily depend on the source.

Me: In your heart of hearts, do you think that the stranger with the dog was right or wrong in telling you all to stop shaking the tree?

Me: See? You know what is right and wrong in your heart. There will be more times now that you are not with us. Times that you will have to decide how to behave. Times that only you will be able to judge yourself and your own behavior.

On a lighter note, we found out that Big likes pickles! 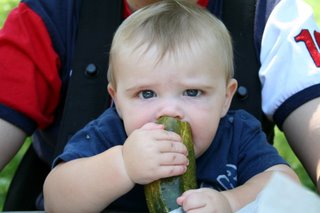 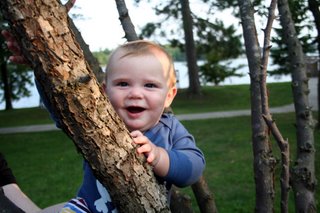