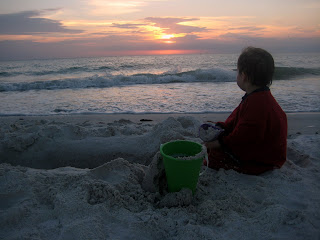 One of the greatest gifts that kids give us --and I think the younger they are, the better they are at doing this-- is forcing us to live in the moment.

When, for example, as just happened here when Big came into the bathroom announcing that he had to go to 'go potty!' and I hastily ripped off his pants and diaper and when he immediately got up off the potty announcing that he was 'all done' and while subsequently directing his attention to washing his hands, went "number 2" directly on the floor, well, you are forced to focus on the moment. And I don't even mean the immediacy of cleaning up the dropped "number 2", I mean, the moment prior to that one in which you must make sure that he doesn't proceed step in the "number 2" that is, now, directly under the place that is intended for his foot as he steps off of the potty-turned step-stool.

I mean to say you can't be on your Blackberry at that moment or fiddling around with a playlist on your iPod. No. You're THERE.

Yesterday at lunch I found myself savoring some time with Big in a way that I never, for example, savored while reading Marx in the library at grad school (in retrospect, I wish I had savored that time a bit more than I did. You don't realize what a regular teaching load does to extra-curricular reading, that is, reading that is not DIRECTLY tied to productivity somehow). He doesn't usually sit long for lunch and so we usually grab a couple of bites of cottage cheese or a yogurt stick and we're off to coloring or playing cars or something before nap-time. Yesterday, however, I introduced him to Alphabet Soup!

He sat on my lap and we dug our spoons into each other's bowels, fishing for "W"s and "S"s and "M"'s like a persnickety fisherman in an overstocked pond. "What's dis?" he would ask. "I think that's a broken 'U' or maybe a 'J'!" and he would gobble it up.

We did this for what felt like an hour and when it was all gone and I had put away the bowls, he asked "More soup!"

What could I do but oblige?
Posted by giddings at 11:19 AM

I had to click over on the link to make sure the Alphabet Soup wasn't some new fangled thing with which I was not familiar! ha!

I wish I could be so funny when I try! Thanks for the tip! -L