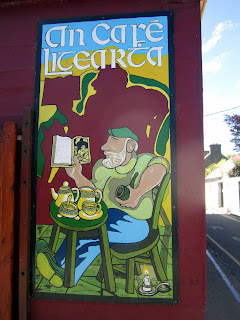 So, Dingle Town and the Dingle Peninsula* are amazing and were certainly the highlight of our trip to Ireland. In a sentence, over the course of the few days we spent there, we saw a live dolphin, ancient forts and stone houses, we learned about the potato famine, BioMom and I "sealed the deal" at a 12th century church (and, as it turned out, using our fingers rather than our thumbs, we didn't do it correctly), and we body-surfed in 50 degree Atlantic waves on the largest beach I've ever seen.

On the first day we ventured out to Dingle Town to grab lunch in the harbor.

While BioMom and Ten foraged, Big and I walked to the end of the harbor to see what we could see. 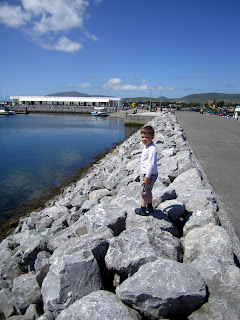 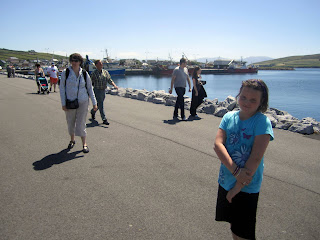 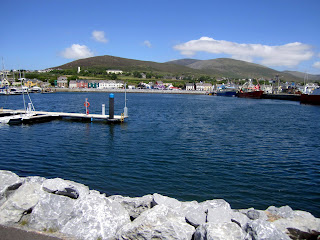 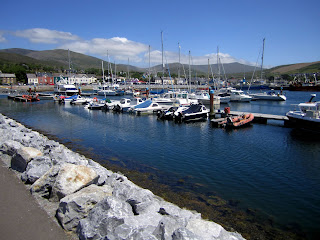 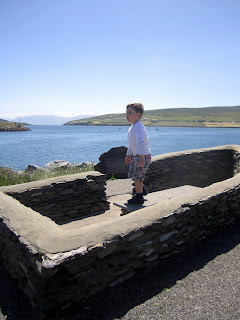 I was very curious about a so-called Dolphin named Fungie that supposedly lived in Dingle and was in every piece of literature on the town that we had ever run across. Needless to say, I was extremely skeptical. There was also a big aquarium in the town and so I thought the whole thing was a tourist trap. So I thought, well, if we took our lunch out to the end of the harbor pier, maybe we'd get a glimpse of him (ha ha ha).

Big and I had one of those magical interactions with a local at the tip of the pier. I'm starting to think they were leprechauns or angels or something, giving us an extra hand just when we needed it.

So we're at the end of a long walk at the end of the pier, wondering if BioMom and Ten will meet us out here with sandwiches when out of nowhere a man stands up and strikes up a conversation with us. I guess he was fishing, but of all of the places in Dingle, he seriously chose one of the most tourist-laden points, not to mention the boats in and out. This is all to say that I have no idea why a local would choose such a spot to fish.

So I start asking questions like what the heck is that building across the harbor? 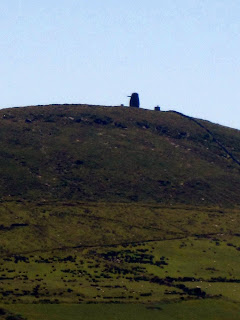 Oh that? He says. He goes on to tell me that it is a building that was essentially "make-work" during the famine. It lets sailors know where the beginning of the bay is.

I found a bit more about the Eask Tower online. It was built in 1847 and is built entirely of stone. It is crowned with the 19th century's mariners beacon and a World War II look-out post. This is because the mouth of Dingle Harbour is a "blind" mouth, and this beacon told sailors to let their sails down, enabling them to lose speed and to round the harbour mouth safely.

I then asked, tongue-in-cheek really, if we could get a look at this Dolphin.

In all seriousness, he pointed to this fort that we had noticed from the hotel 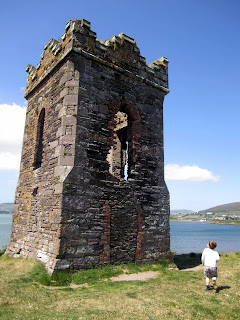 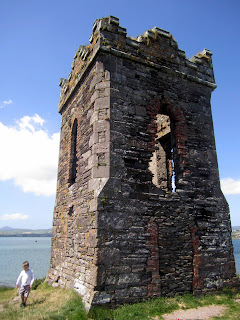 and said take a lunch over there to that fort. That's where he lives. You'll see him when a few boats start circling and revving their engines.

Yes. He read my mind. Apparently this dolphin, Fungie (pron: FOON-GEE) has lived in this entry of the Dingle Harbor for nearly 30 years now and, in contrast to what is known about dolphins living with other dolphins, he seems to prefer the company of humans. Visitors are virtually guaranteed to see him on a visit to Dingle!

So Big and I hurried back to the car and found BioMom and Ten and urged them to follow the suggestion of the man-of-the-sea we had just met.

Reluctantly, they got back into the car, lunch in hand, and we drove out a bit out of town to what barely constituted a road that lead to a not-very-clean beach, but a walking path to the fort. There we had our picnic and waited. 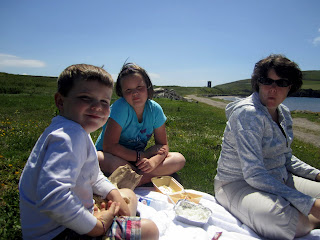 And waited and waited. And yes, that was the weather. In Ireland. Needless to say, waiting was NOT a problem. 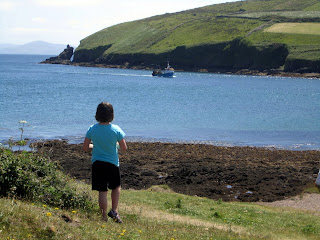 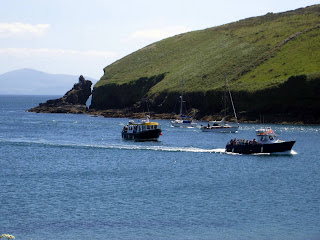 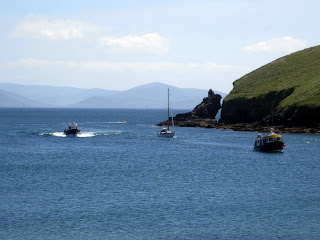 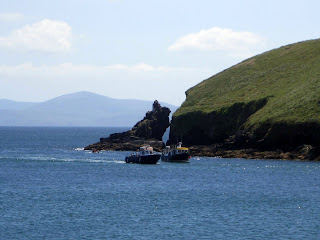 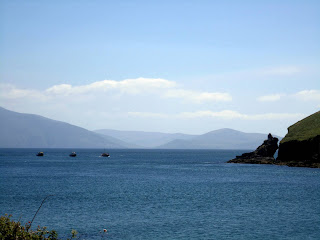 And then, we saw him. 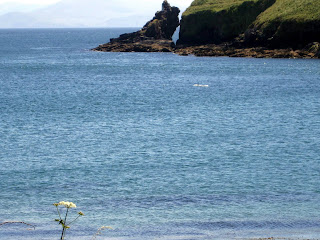 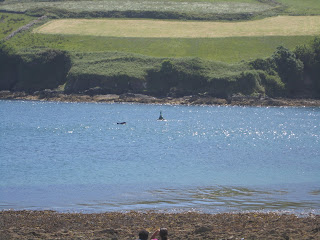 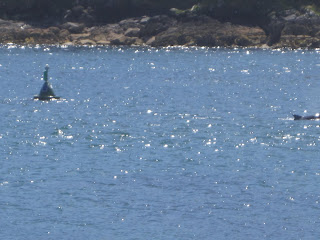 I'm going to sign off for now and report about the rest of Day 12 tomorrow.

*Rick Steves has a pretty great description of the area in a Smithsonian article that is available online. Check it out if you're interested.
Posted by giddings at 7:57 PM